…and that’s all I have to say about that 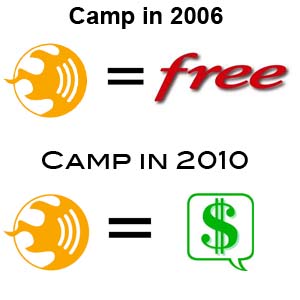 Building community is no easy feat. It takes a long time to create something where there was nothing before. Back in 2005, I heard about this thing called podcasting and was seeking local support. My husband suggested I create a MeetUp group in order to be a beacon for folks like me in San Antonio and the surrounding areas. I had no idea where that first step at building community would take me.

The San Antonio Podcasting group allowed me to connect with folks who were just as excited about podcasting as I was. It also became a place where we could educate and encourage the curious. We shared our knowledge with anyone who was interested in podcasting. The folks I met during those early years are folks that I consider my good friends to this day.

Back then most online interaction was either through our local meetup group or the larger far reaching Podcasters Yahoo group.Â  It was through these online interactions that I started meeting folks who were creating these events called Camp. I had never heard of it before and was intrigued. On Sunday, August 27, 2006 my life opened up in a whole new way. I attended my first unconference event,Â  Barcamp Texas.Â  This was my first introduction to how community building could extend past a city.The folks I met there were bursting with energy. I remember the discussion topics ranging from Ruby on Rails to podcasting to video blogging to leadership and much much more. The conversation was so rapid fire and varied. It was exhilarating.Â  I learned about all kinds of upcoming events and got connect with these folks online.

The next camp event I attended was in in March of 2007 and it was organized by these same folks. It was the first Barcamp Austin. I knew about this event with enough advance notice to include the podcasting group. I shared what I had gleaned from my experience in August and got a group together to represent San Antonio. It was during this planning phase the question, “When will we get a Podcamp in San Antonio?” was asked in an online discussion. You see Boston had just held the very first Podcamp in September 2006 and the idea of having an event dedicated to podcasting was very appealing.

We made the official announcement at Barcamp Austin about Podcamp San Antonio. We went back to San Antonio ready to make it happen but with no clue how. Up until then we had only been on the participant side of a camp. Now we were going to have learn how to be organizers of a camp.Â  Lucky for us we had folks more than willing to share their knowledge and insight to make this dream a reality. We sought out the advice of the folks who were doing it. The organizers of Barcamp Austin and Podcamp Boston were our models.

There had never been a camp in San Antonio. So the first challenge was to educate potential sponsors, participants and encourage folks who had something to share to join us. On May 19, 2007 the very first camp event in San Antonio was held. It was a labor of love for the all volunteer San Antonio Podcasting group. At the end of the day we were so appreciative of our wonderful sponsors and donors who made it possible to make this event free to participants.

The thing we knew about camp was this: It was a no-pitch zone, It was a Learn, Share, Grow event. Sponsors gave money to encourage and support community but did not speak or solicit business in any way shape or form. This was such a new and radical concept and so different from typical conference style events. The thing that made it different was that it was called an UnConference.

An unconference is a facilitated, participant-driven conference centered on a theme or purpose. The term “unconference” has been applied, or self-applied, to a wide range of gatherings that try to avoid one or more aspects of a conventional conference, such as high fees and sponsored presentations. Wikipedia

Once the dust had settled from our day long event, we knew that we would do this again. From that point on we have had a podcamp in San Antonio each and every year (4 so far). We branched out to organize Barcamp, Freelance Camp, TweetCamp, ActionCamp and more. Through camps we were able to come together to build community. It was absolutely wonderful.

I can honestly say it wasn’t all wine and roses. There were times I had to take a firm hand with folks to help them understand that although we were in possession of participant registration information, it was never to be used for non-camp purposes. I had great teachers and knew that to spam this newly found community would be counter productive to all of the collective efforts to build a community in San Antonio. We had to set ourselves apart from traditional events in order to succeed.

At every event folks came up to us and told us they never knew such a wonderful and giving community existed. By hosting events that encouraged the open sharing of concepts, ideas and knowledge a wonderful thing happened. It was like watching a newly born foal trying to stand up on it’s gangly legs. Our community was slowly but surely growing and learning to stand on it’s own. Most of the folks I consider my friends and peers I met through the camp community. I think most folks will say the same of me.

Fast forward a few years and the camp model as we know it is changing. I have always stood by the concepts I learned from those pioneers who introduced me to the unconference world back in 2006. Sponsorships have been the way for camps to maintain the free model. If the organizers are the brains of the operation and the participants are the heart of the event, then sponsors are the lifeblood that make it all possible.

There are plenty of fantastic sponsors ready to help support camp events. Finding these sponsors does take time. Bringing a camp into fruition is an all volunteer effort. I have never heard of an organizer getting paid for putting a camp together. The funds for the event held here in San Antonio have always come from sponsors and donors. Every single participant has attended for free.

Let me share a secret with you. It doesn’t take a lot of money to host a camp. Your biggest expenses are always the venue, shirts, badges, banner and maybe a lunchtime meal. I usually opt to allow folks enough time to manage their own mealtime expenses to keep costs down. Many times venues will either donate their space as sponsorship or the cost of the space can be translated to food or snacks for participants. I have always liked handing out a camp t-shirt and badge as participant take-aways. I love it when I see t-shirts of our past events around town. I still hear from folks who hold onto their camp badges as keepsakes. It is a reminder of their shared experiences. However, even then that is only if you have enough sponsorship to afford those items. The main purpose of a camp to Learn, Share, Grow. You don’t need a shirt or badge to make that happen.

For some unknown reason the free model is changing. I’m seeing camps charging fees to participants. It saddens me to think about how folks who are new to the camp concept are joining the party too late. TheÂ  free and open Learn, Share, Grow model is becoming less common. I’ve always held the belief that if you charged for an event it was called a conference, a seminar, a workshop. Those existing models work well if you want to charge for knowledge. Camp was called an UnConference because it was the opposite of a traditional conference in so many ways. A few of them being:

-No set speakers (whoever shows up creates the event)

-Open and free to all (sponsorship & donations made this possible)

-No pitch zone (before, during or after)

If you were lucky enough to attend one of these free events it changed the way you thought about San Antonio and started you on the journey to being a part of this wonderful and thriving community.

I feel for the folks who are discovering the camp concept for the first time in a pay for admission environment. I recently attended an event that had the word “camp” in it’s title and charge a $20 fee. It was different than what I would call a traditional camp. It had a keynote speaker, preselected speakers and topics. Attendees were not part of the creation of the event. So yes, it was different.

The challenge I face with folks using this concept to then take what was an existing free model and then turn around to charge an entrance fee while still crowdsourcing goes against everything I’ve held dear about camp over the last few years. It seems counter intuitive to charge a fee to participants and while asking them to create the event.

I reached out to my peers. I connected with the folks who led the way. The folks whom I consider to by my mentors. It seems that those folks don’t “do camp” anymore. For varying reasons many of the pioneers have opted out of creating camps. This has left a gaping void in communities far and wide. I understand why. As a pioneer, you want to lead the way. You want to show folks how to do it and do it right. You want to allow for each city event to have it’s own unique flavor. It really can be a wonderful thing to see something grow and blossom where before there was nothing. However, seeing the rules change for the folks who are new to the game has left me with a hollow feeling. Honestly, it doesn’t make sense to me.

I have been approached by several folks in the community asking me about this new pay to play model. There is disappointment and frustration coming from folks who understand camp. I had tried to stay away from what I knew is one of my hot button topics.

I have always believed that camps should be free.

I went on a recent rant about this and allowed my frustration to show through. Probably not the wisest decision I’ve made, but I’m not going back to delete those posts. To do that would be the opposite of being transparent. Being social sometimes means we don’t agree. It’s okay. Every family goes through challenging times. This is one of them.

The fact of the matter is that it takes work to make a camp a success. It takes time out of already busy schedules. Finding a venue, soliciting sponsors, encouraging folks to attend. It might seem easier to charge a fee to cover costs instead of working the sponsorship model.

Here’s another secret: Sponsorship for camps I have been involved in have started at $100.

Let me repeat this, “It really really doesn’t take that much money to create a camp.”

It is not about the shirts or badges or anything else. It is only about the Learn, Share, Grow.

Everyone I know has been lucky enough to be a part of this in a free model. It would appear the folks who are only now joining the party aka the late adopters will not be so lucky.