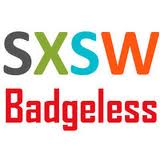 Several of us who made the trek from San Antonio to Austin, TX for the Interactive portion of South by Southwest (SXSW) were interviewed by San Antonio Express-News reporter, Valentino Lucio about attending without an official badge. In the past 5 years, I have been badged and badgeless at SXSW. While it is true, there are certain things you can only get with a badge like access to panels, the trade show and the Bloggers Lounge. I do advise folks who have never gone to give the badged experience a try. However, do not let being badgeless stop you from participating in the festivities and reaping the rewards of such a large scale event.

SXSW Interactive has become such a big event (15K last year and 20K this year) that there is no shortage of side aka badgeless events happening. You will run into a lot of the same folks who are attending badge-only events. I have to say that in my experience having or not having a badge has not limited me one bit. I have been able to meet face-to-face with my online community and discover new friendships that will continue further online.

Just like in most things, you will get what you are looking for out of SXSW. If you want to “party like it’s 1999”, there are plenty of events to make you feel like you belong to a fraternity. If you want to make connections with new folks or simply reconnect with old friends you can do both at the same time. If you want to learn about all of the cutting edge apps and discover the next Twitter, there are plenty of folks who invite you to “download their app for free”.Â  Are you looking for schwag? Then you’ll leave with enough t-shirts to last all year.Â  There is no end to opportunities to learn, discover and have fun.

I would like to make one thing clear, I am not a SXSW-hater. I want SXSW to continue to be successful for many reasons. One of the main reasons is the fact that this is a global event that is right in our backyard. For the most part you have to travel far and wide to attend events like BlogWorld, SOBCon, CES and Le Web in order to have this kind of access to the social and tech community. I’ve met folks from all over the globe who make the annual trek to Austin for SXSW. While it does appear to be experiencing growing pains over the last couple of years, I do wish the organizers much continued success.

A copy of the article from the San Antonio Express-News is listed below as well as a link back to the original post:

Event offers much for techies without $700 registration.

At South by Southwest Interactive, having an event badge is a right of passage. But for some, itâ€™s just an unnecessary accessory that isÂ costly.

The tech world descends on Austin for five days during the interactive portion of the festival, which started Friday. And for some San Antonians, the trek up Interstate 35 is worth the trip, but the more than $700 needed to register is steep. Still, they donâ€™t let that stop them. Many are able to party-hop, network and grab loads of free handouts without having to put a dent into theirÂ wallets.

Jennifer Navarrete, the chapter founder of the San Antonio Social Media Club, has attended the festival five times, sometimes with a pass and other times without. This year, Navarrete and her husband decided to forego the pricey badge. They were still able to meet people and attend events they had plannedÂ for.

â€œWhatever we wanted to get into we went to,â€ she said. â€œI ran into everyone I wanted to see, and the parties werenâ€™t hard to get into. Some of it is serendipity, but I connected with people I only get to see a few times aÂ year.â€

As a whole, SXSW draws about 200,000 registrants and panelists to the nine-day event. Itâ€™s hard to say how many people attend the event without a badge, but several companion events have emerged around the major ones, said Navarrete, who went to various parties and attended panels at the Capitol and at the Social Media Club house near the Austin ConventionÂ Center.

â€œIf you donâ€™t have the budget, you can still get a lot of value without a badge,â€ she added. â€œPersonally, I donâ€™t see anyÂ value.â€

For the past five years, San Antonio native Veronica Morales has attended the tech portion of SXSW and has never purchased a badge. The social media specialist, who is starting her own company called The Social Being, said thereâ€™s a lot of planning involved before she makes the trip to theÂ festival.

â€œI do my homework,â€ she said. â€œIt has a lot to do with your research beforehand. If you just show up, you wonâ€™t get a lot out of theÂ visit.â€

She utilizes sites such as Foursquare and Plancast to meet people and to find out what events are popular. Plus, she added, those that stay up with social media can direct people to free giveaways andÂ contests.

First timer Lisa Baehr said the cost was the main reason she didnâ€™t get a badge. The tech enthusiast wanted to be a part of the event to learn about new, emerging ideas. But, she added that because she didnâ€™t have a badge she didnâ€™t feel like she got to experienceÂ enough.

â€œI need to get a taste of it,â€ she said about the festival. â€œItâ€™s an energizing event with a lot of new ideas. Iâ€™m considering getting a badge next year because I think Iâ€™ll get more out of myÂ visit.â€

With a lanyard around his neck, Choco Valdez just fits in with the crowd of badge holders. The architecture student takes full advantage of all the free food and drinks that sponsors provide throughout the event. This year was the second year Valdez has attended the interactive portion without a badge. The planning process for him started about five months ago and even included him creating business cards that he could use to enter contests. So far, he won a pair of concert tickets, heÂ said.

He doesnâ€™t spend money on a hotel because he stays with family. And last year, the Northwest Vista College student said he took $100 with him to the festival and that he made it home spending about $40. This time around his goal is to cut his spending inÂ half.

2 thoughts on “Interview On Going To SXSW Badgeless”