One of the things I have enjoyed doing as head of Social Media Breakfast San Antonio has been to put my Social Media Reporter hat on for community and nonprofit events across the Alamo City. It’s my way of giving to my community. It’s been an honor to share my knowledge, expertise and social reach to shine a spotlight on events which are uniquely San Antonio. So, it should come as no surprise that when I found out I would be part of the State of NASA event, I was pumped up and ready to don my Social Media Reporter hat again.

NASA knows a thing or two about making things happen. If they can land a man on the Moon and a rover on Mars, then a social media event is a walk in the park. In the first communication, I received a list of hashtags (#StateofNASA and #NASASocial) as well as social media handles for Twitter, Facebook, and Instagram.

The first step was to make sure I was following all the social profiles on all three social networks. Want to follow along and join the fun? On Twitter, I created a NASA List. Feel free to subscribe to follow the #StateofNASA conversation happening on Monday, February 12th.

Next, I created a list of all the social media handles so that I could copy and paste as needed. One of the things I’ve learned over the years at live events is to create as many shortcuts as possible. While Twitter, FB, and Instagram should auto-populate the handles as I type, I’ve learned it’s always best to have a Plan B in your back pocket.

Then, I created keyboard shortcuts on my iPhone for the #StateofNASA and #NASASocial hashtags. Live tweeting isn’t for the faint of heart or the slow-fingered. Having these two hashtags which would be used in every tweet, post and photo would certainly save me time. 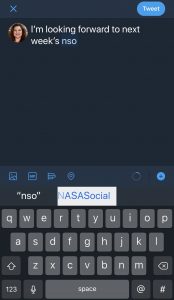 Wondering exactly how that’s done? This keyboard shortcut is a trick I learned from Rebecca Council at an event we were working at last year. Here is how it works:

Now, every time I type the shortcut: nso the hashtag #NASASocial or sona #StateofNASA pops up on my screen.

Do you have some tried and true tips to keep yourself organized at social media events? Drop your idea in the comments below. I’ll be sure to give you a shoutout in thanks. Cheers!