The Other Half Time Show 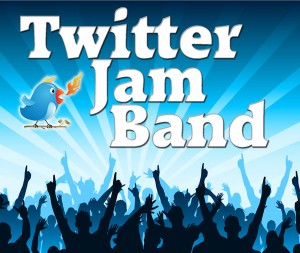 A group of geek musicians got together for an impromptu jam session after Tweetcamp San Antonio in July 2009. Since this all started because of Twitter, they decided to call themselves the Twitter Jam Band. This ad hoc group got together to play several times during 2009. Members would vary depending on who showed up.

The idea for The Other Half Time Show was conceived during a conversation between Alan Weinkrantz and Jennifer Navarrete at a luncheon. To live web stream the Twitter Jam Band during the SuperBowl seemed like a crazy idea. The decision to pair up this event as a fundraiser for Holly Julian was what turned the idea into a reality.

Holly Julian has Chronic Obstructive Pulmonary Disease or C.O.P.D. (4th largest killer in US) and is raising funds to help pay for anticipated out of pocket expenses for her much needed double lung transplant. Holly’s husband, Steve, is a member of the Twitter Jam Band which is why this was a natural fit. Their fundraising goal is $100,000. Thus far they have raised $20,000 through bake and plant sales, silent auctions and other community events. Our hope is that The Other Half Time Show Benefit Concert can go a long way towards raising the remaining $80,000.

SHARE this by stumbling, blogging, tweeting, facebooking and talking to your friends and network about this event. Direct folks to http://theotherhalftimeshow.org

WATCH us on Sunday, February 7, 2010 as the Twitter Jam Band performs 3 songs during The Other Half Time Show. The performance will begin 5 minutes after The Who are done with the Super Bowl Half Time Show.

DONATE the cost of a day or week or month’s worth of lattes or more to Holly Julian through the National Foundation of Transplants http://www.transplants.org/donate/hollyjulian

You can find out more about Holly Julian at Hugs4Holly http://hugs4holly.org

Organizers for this event are:

# C.O.P.D.# Cause# hugs4holly# superbowl# The Who# theotherhalftimeshow# twitter jam band

Interview On Going To SXSW Badgeless

…and that’s all I have to say about that